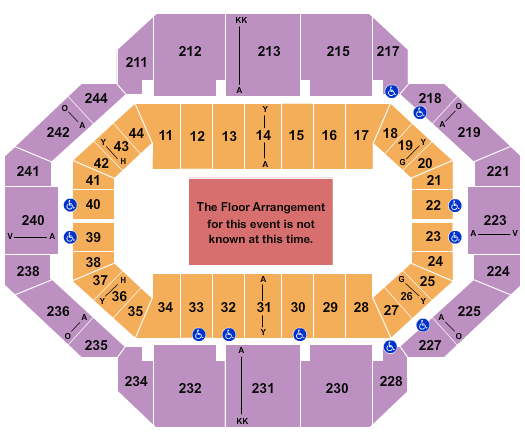 Who will play at Rupp Arena At Central Bank Center today?

No event is happening in Rupp Arena At Central Bank Center tonight.

How many seats are available in Rupp Arena At Central Bank Center?

The seating capacity of Rupp Arena At Central Bank Center is 70677.

Can you buy event tickets at Rupp Arena At Central Bank Center?

Yes, you can buy tickets at Rupp Arena At Central Bank Center provided if they are available.

What are the best seats available at Rupp Arena At Central Bank Center?

Just like every other venue, there are different levels at Rupp Arena At Central Bank Center as well. The entire seating plan is available on our website, and you can book tickets for the section you like.

How many events are taking place at Rupp Arena At Central Bank Center this week?

You can check the complete list of events taking place at Rupp Arena At Central Bank Center this week and beyond by simply logging on to the venue’s page on our website.Top selling event of the week is 2021-2022 Kentucky Wildcats Men's Basketball Season (Includes To All Regular Season Home Games).

Rupp Arena
Attractions in Lexington, Kentucky keep popping up. The region is widely known for its picturesque views, outdoor recreation, and diverse businesses.

Lexington features an array of attractions year round while merry-go-round people find every reason a good reason to enjoy and celebrate.

The City"s entertainment industry is rapidly gaining momentum; hence the need for new arenas, theater complexes and sports arenas has become indispensible. But, attractions like Rupp Arena have put Lexington on the map for making both locals and visitors falling in love with the events the Arena brings for them to the region. Rupp Arena"s year-round events give keen pleasure to the music-addicts, sports-aficionados and entertainment-lovers alike.

Rough estimates show that each year seasonal basketball events in Rupp Arena draw over 350,000 fans, while football brings a growing audience each season. The average annual attendance for all events at Rupp Arena is over 850,000 visitors.

A centerpiece of Lexington Center, Rupp Arena was named after UK coaching legend Adolph Rupp. The history of Rupp Arena dates back to 1976, when it opened its doors as the biggest arena built specifically for basketball games in the country.

The year 1985 saw the site playing host to the NCAA Final Four. The NCAA Final Four title was won in an upset by Villanova. Since then, Rupp Arena has hosted several NCAA Tournament regional matches.

Most recently it hosted NCAA Tournament in 2007, where Louisville lost to Texas A&M. The facility"s primary occupant is the Kentucky Wildcats men"s basketball club, while the club leads the country in NCAA basketball attendance on annual basis.

Rupp Arena features Lexington Horsemen arena football with a capacity of 7,550 seats, theater with 2,300 seats; concert hall with 10,000 seats; and arena with 23,500 seats. In addition to featuring basketball and football games, the arena also hosts numerous concerts, trade shows, family events as well as motor sport events throughout the year.

Rupp Arena is dedicated to providing a complete range of sports and entertainment events. Needless to say the attractive tenant architecture, great interior and amenities, and impeccable acoustics together make every performance memorable.

The City of Lexington is proud to be a home of the state-of-the-art Rupp Arena which is characterized distinctly primarily for one reason: it caters to a wide variety of audience with different tastes. Be it a regional or national sports events, theatrical performances, concerts, or family oriented shows, the Rupp Arena offers something for everyone.

Rupp Arena is going to pack with fans again as it has scheduled thrilling games and eclectic performances while featuring best teams and world-renowned artists.

So, if you have not visited the site recently, take a look at its schedule and make sure to grab your tickets to the event of your choice before they all sell out!

Where can i find jeff dunham cheap rupp arena tickets with a discount code?

Find tickets of choice only at TicketLuck; your best source of low-cost premium event tickets. Browse our huge inventory to find cheap tickets for Jeff Dunham event and contact our Livehelp Representative to know our exclusive discount code.

I want to attend the myley cyrus rupp arena lexington kentucky concert! Can I buy cheap tickets to it form Ticket Luck? Would you guys have them?

Our huge inventory has the tickets to almost any event taking place, all at a very cheap price. You can purchase cheap Rupp Arena tickets from Ticket Luck anytime you want!

Do you have the exact seat numbers to Celtic Women at Rupp Arean Lexington KY tickets?

We are not provided with exact numbers by the brokers. However, you can be assured that all the seats will be together, as this is the standard of ticket-selling websites.

I want buy tickets for disney on ice in rupp arena in lexington ky but wanted to know if i would require one for my 3 year old?

Yes, you will be needing Rupp Arena Tickets for Disney show for your 3 year old. Under 3 kids don't require a ticket.

Worry not. You can find all kinds of affordable Miley Cyrus tickets right here at our website. Thanks.

Where can I find cheap rates for rupp arena tickets?

We are known for providing cheap rates for Rupp Arena tickets on the entire web. Book yours today!

Where do i find + discount + attraction + tickets + kentucky?

Find them all only on TicketLuck; your best source of providing premium event tickets!

Will the view be clear at the rupp arena tenn?

Rupp Arena Tickets bought from us assure you that the view will be clear.

Are there any free miley cyrus tickets for dec 1?

Visit our Miley Cyrus page to find out the availability of the tickets.

When is miley cyrus concert lexington ky going to open?

Go to our Miley Cyrus page to find out the concert details.