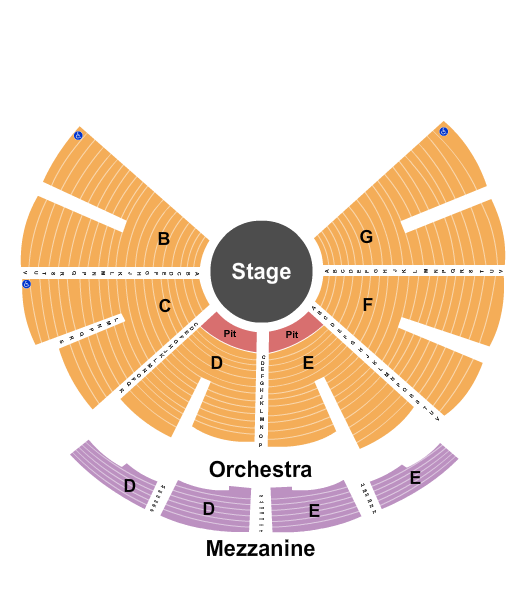 Who will play at NYCB Theatre at Westbury today?

No event is happening in NYCB Theatre at Westbury tonight.

How many seats are available in NYCB Theatre at Westbury?

The seating capacity of NYCB Theatre at Westbury is 11101.

Can you buy event tickets at NYCB Theatre at Westbury?

Yes, you can buy tickets at NYCB Theatre at Westbury provided if they are available.

What are the best seats available at NYCB Theatre at Westbury?

Just like every other venue, there are different levels at NYCB Theatre at Westbury as well. The entire seating plan is available on our website, and you can book tickets for the section you like.

How many events are taking place at NYCB Theatre at Westbury this week?

You can check the complete list of events taking place at NYCB Theatre at Westbury this week and beyond by simply logging on to the venue’s page on our website.Top selling event of the week is ABBA: The Concert - A Tribute To ABBA.

The NYCB Theatre at Westbury is a renowned venue located in Westbury, within New York. It is an entertainment hub built in the theater in the round style that can seat more than three thousand people. It was initially built to play host to musicals and has since then become one of the premier entertainment venues in New York City.

The Theatre was founded by Lee Guber, a nightclub owner, Frank Ford, a radio broadcaster, and Shelly Gross, a TV news anchor who first built the Valley Forge Music Fair in Devon, Pennsylvania. After the success of this venue, they built this venue, known then as the Westbury Music Fair, in Westbury, a New York City suburb. The initial facility was a striped tent that could host eighteen hundred people, similar to the many tent theatres located all over the US during the fifties.

Located near the Northern State Parkway and the Wantagh State Parkway, a theater was then built in 1966 that could house upto three thousand people. A concrete facility complete with carpeted floors and chairs in the director's style, it continued with the theatre in the round style, as was with the tent. During the first year, the concrete theatre played host to such musicals as The King and I, earning over two hundred thousand dollars. In ten years, the theatre was earning thirteen million dollars, fifty times more.

This prestigious theatre has also played host to the likes of Kenny Rogers, Bruce Springsteen, The Who, The Doors, Stevie Wonder, Ringo Starr & His All-Starr Band, Vivian Blaine, Bob Weir, RatDog, Jordin Sparks, Chris Isaak, James Hunter and Weird Al Yankovic. Many NYCB Theatre at Westbury tickets have been sold for these concerts, as have been for the many musicals it has staged. It is known today as the place to go for entertainment, with its round style appealing to many.

This is one of the most comfortable venues around, with heat and conditioners in the seats. Its intimate style allows productions to be enjoyed more fully, with a greater connection to performers.

What if the fresh beat band tickets westbury event I get are not the ones I actually ordered?

That will not happen but just in case it does then please inform us as soon as you get the wrong Nycb Theatre At Westbury Tickets delivered to you and we will provide you with the ones you ordered.

What if the courier company loses my nycb westbury cake boss tickets?

That will not happen but just in case it does then we will provide you with new Nycb Theatre At Westbury Tickets absolutely free of cost.

Can I reverse my order for miranda cosgrove westbury tickets since I placed the order without putting the discount code?

The order for NYCB Theatre At Westbury Tickets once placed is considered final. Don't forget to use the code next time.

I want to buy discount tickets westbury theater. How can i?

You can get discounts on your Nycb Theatre At Westbury Tickets by using the discount codes mentioned on our page.

Are clay aiken westbury tickets with you at aaa codes?

NYCB Theatre At Westbury Tickets are available with us at aaa codes.