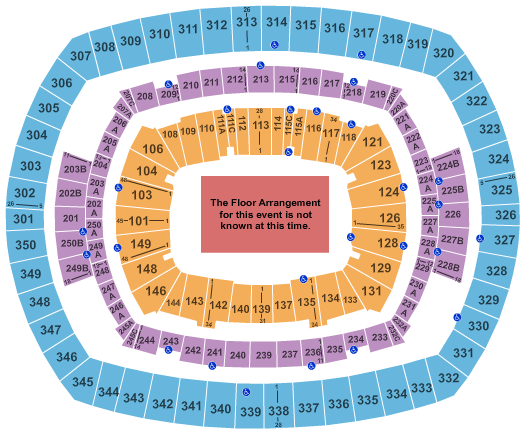 Who will play at MetLife Stadium today?

No event is happening in MetLife Stadium tonight.

How many seats are available in MetLife Stadium?

The seating capacity of MetLife Stadium is 57811.

Can you buy event tickets at MetLife Stadium?

Yes, you can buy tickets at MetLife Stadium provided if they are available.

What are the best seats available at MetLife Stadium?

Just like every other venue, there are different levels at MetLife Stadium as well. The entire seating plan is available on our website, and you can book tickets for the section you like.

How many events are taking place at MetLife Stadium this week?

You can check the complete list of events taking place at MetLife Stadium this week and beyond by simply logging on to the venue’s page on our website.Top selling event of the week is Army West Point Black Knights vs. Navy Midshipmen.

MetLife Stadium tickets are available for you to enjoy the event of your choice at one of the most famous venues in the country. The MetLife Stadium is a state-of-the-art facility and is home to two NFL teams, the New York Giants and the New York Jets.

The History of MetLife Stadium

The Giants Stadium was a historic NFL venue but as it reached three decades of existence, plans to replace it began to take shape. The New York Jets were tenants of the New York Giants and they had their own plans of constructing a stadium in Manhattan. The proposed stadium was to have a seating capacity of 85,000 people and would be part of the city’s Olympics bid for 2012. The seating capacity would be reduced to 75,000 for the Jets games.

Since this was a major project, it required substantial financial resources. The project unfortunately shut down in 2005 because it faced opposition from quite a few sources. As a result of that, the Jets and the Giants signed an agreement to construct a new stadium that would be home to both sides.

On September 5, 2007, the construction on the MetLife Stadium began and it opened its doors for the public for the first time on April 10, 2010. The estimated cost to construct this imposing venue was $1.6 billion which made it the most expensive US stadium in history at that point in time.

The first ever event to be held at the MetLife Stadium was the lacrosse event known as the Big City Classic. The first ever NFL game was played on September 12, 2010 when the Giants beat the Carolina Panthers 31-18. The Jets took to the field at their new home for the first time the next day when they faced the Baltimore Ravens. Then on January 8, 2012, the Giants beat the Atlanta Falcons 24-2 in the first ever playoff clash to take place at the MetLife Stadium. The Giants also went on to clinch the Super Bowl that season.

The MetLife Stadium was confirmed as the venue of Super Bowl XLVIII on May 25, 2010. It was to be the first instance of a Super Bowl being played in a stadium without a dome in a cold-weather city. On the day of the game, the temperature was 49 °F or 9 °C, which put it on the third spot on the list of the coldest Super Bowls in history. The Seattle Seahawks came out on top against the Denver Broncos to clinch their first Super Bowl title.

Some of the most famous sporting and non-sporting events have been held at the MetLife Stadium in the past and it will not be any different this time around either. You can now buy MetLife Stadium tickets to watch the following events live at this amazing venue: