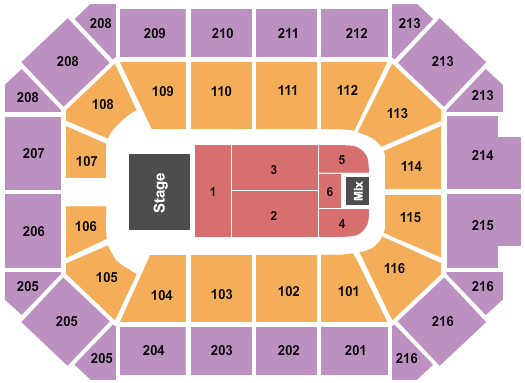 Who will play at Allstate Arena today?

To check Allstate Arena for today, all you have to do is visit our website and check event listings along with available tickets. Right now, following events are happening at Allstate Arena:

How many seats are available in Allstate Arena?

The seating capacity of Allstate Arena is 124697.

Can you buy event tickets at Allstate Arena?

Yes, you can buy tickets at Allstate Arena provided if they are available.

What are the best seats available at Allstate Arena?

Just like every other venue, there are different levels at Allstate Arena as well. The entire seating plan is available on our website, and you can book tickets for the section you like.

How many events are taking place at Allstate Arena this week?

You can check the complete list of events taking place at Allstate Arena this week and beyond by simply logging on to the venue’s page on our website.Top selling event of the week is 103.5 Kiss FM Jingle Ball: Doja Cat, Lil Nas X, Black Eyed Peas & Saweetie.

The Allstate Arena is a sports arena in Rosemont, Illinois. The Arena is located at the intersection of Mannheim Road and Interstate 90, adjacent to O'Hare International Airport. The Chicago Wolves hockey club, DePaul University men's basketball, and the Chicago Rush Arena football team use this outstanding arena as their home venue.

Located at the N. Mannheim Rd in Rosemont Illinois, Allstate Arena is home to a diverse array of events that are showcased at the Arena throughout the year. Let it be some indoor sporting event or a lively music concert, Allstate Arena has it all in its events calendar. Moreover Arena also serves as the home ground for American Hockey League's Chicago Wolves, Arena Football League's Chicago Rush and Women's National Basketball Association's Chicago Sky.

The arena broke ground in 1977 and opened its gates for audience on July 2, 1980 as the Rosemont Horizon. The arena was originally intended to serve as the home turf for World Hockey Association's Chicago Cougars; however the franchise disbanded earlier in 1975. The arena was constructed with a construction cost of $19 Million which was financed by Village of Rosemont as they issued bonds. The name of the arena was changed to Allstate Arena when the Allstate Insurance Company purchased the naming rights after paying for Arena's renovation. Later in 2003, the floor of the Arena was named after the Basketball Hall of Famer and DePaul's Men's Basketball team's former coach Ray Meyer and his wife Marge Meyer.

Allstate Arena has a bright history of hosting some of the most memorable sporting events in the history and one of which happens to be Wrestlemania. Allstate Arena has hosted Wrestlemania on three occasions which makes it one of the two sporting venues that has hosted the event three times. And apart from the Wrestlemania, the arena also hosted Night of Champions in its most recent history. Moreover Allstate Arena has also had a chance of staging NCAA Basketball Tournament thrice.Allstate Arena also happens to be the first sporting venue in the state of Illinois that hosted UFC 90 back in 2008. That was the first Ultimate Fighting Championship event that was held in the state of Illinois. In 2006 and 2008, Professional Bull Riders' Built Ford Tough Series was also held at the arena. Quite recently WNBA's Chicago Sky has signed a multi-year contract with the Arena, according to which they'll be playing their upcoming seasons at the Allstate Arena.

Over its long illustrious history, Allstate Arena has also played host to some of the big names in the music industry. A number well known musicians and bands have had their live performances staged in the Allstate Arena and some of those names include, The Rolling Stones, Pink Floyd, Phil Collins, Iron Maiden, Slip Knot, Whitesnake, Bruce Springsteen & The E Street Band, Amnesty International, George Michael, The Police, The Who, Ozzy Osbourne, Roger Waters, Michael Jackson, Paul McCartney, Paula Abdul and the list goes on.

So the sporting or music fans in the surrounding region get ready for another jam packed year of anticipated events at the Allstate Arena. And once you've made up your mind, our discounted Allstate Arena tickets will surely help you save some bucks on your desired tickets.

What if bob sieger kansas city gets canceled?

If the event gets canceled, your Allstate Arena Tickets will be issued with a new venue or time ,as the cas maybe. For further queries, feel free to contact your broker.

When will my credit card be charged for bob seger kansas city tickets?

Your credit card will be charged as soon as the deal for Allstate Arena Tickets is final. In case a delay happens, it would not be more than one business day.

Where can i find jonas brothers tickets at allstate at discounted prices?

Find tickets of choice only at TicketLuck; your best source of low-cost premium event tickets. Browse our huge inventory and enjoy our discounted prices!

Can I buy the allstate arena pink tickets from Ticket Luck?

How shall i pay for my katie perry illinois tickets?

You can purchase your Allstate Arena Tickets through American Express, Visa, Master Card, and Discover.

I am here to book a fall out boy allstate arena ticket. Can I get just one from the section where tickets are listed as 2,4,6?

No you cannot book 1 ticket from those section where 1 is not given as ticket quantity.

What other charges does cheap concert tickets big jam 2023 chicago include?

You may visit our Allstate Arena page for the details.

Get all your Allstate Arena tickets from ticketluck.