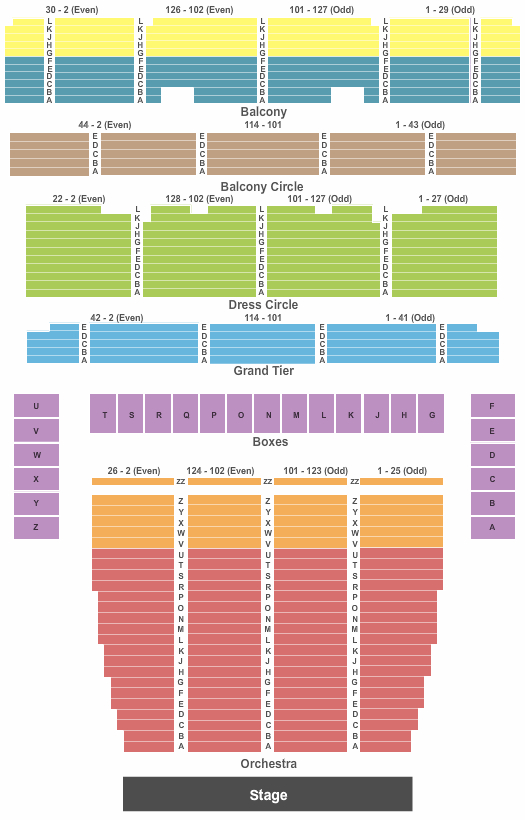 Who will play at War Memorial Opera House today?

How many seats are available in War Memorial Opera House?

The seating capacity of War Memorial Opera House is 9052.

Can you buy event tickets at War Memorial Opera House?

Yes, you can buy tickets at War Memorial Opera House provided if they are available.

What are the best seats available at War Memorial Opera House?

Just like every other venue, there are different levels at War Memorial Opera House as well. The entire seating plan is available on our website, and you can book tickets for the section you like.

How many events are taking place at War Memorial Opera House this week?

You can check the complete list of events taking place at War Memorial Opera House this week and beyond by simply logging on to the venue’s page on our website.

Opened in 1932, War Memorial Opera House is the one of the most visited venues in the San Francisco when it comes to catching ballet and opera. The opera house is home to San Francisco Ballet and San Francisco Opera, which is why it hosts numerous performances by both of the companies each season. Apart from all the events that it hosts, War Memorial Opera House is also quite famous for its architecture that stands out from the rest. It is one of the last buildings that were constructed in Beaux Arts style in the city.

The War Memorial Opera House has the capacity of seating 3146 guests within its main hall. The opera house doesn't only serves and stages the ballet and opera performances; in fact it also hosts various special concerts, presentations as well as lectures. With War Memorial Opera House tickets, the patrons can witness any of the scheduled events at the venue. Just like the exterior of the venue, its interior is just as exquisite and extravagant. The main lobby of the venue offers a grand setting perfectly suited for any sort of celebration, dinner parties or receptions. Due to its setting and intimate ambience, the opera house is one of the most visited venues in the entire Bay Area.

Under the tenure of Kurt Hubert Adler as the general director, the season was expanded however the house was inadequate and lacked facilities to support that expansion in season. Hence in 1979 expansions were made, as a result of which the backstage area was duly extended. In 1981, a new wing was also added up to the opera house. The addition of a new wing made way for some extra space for the coaches, sets, and the dancers. Around the same timeline, Zellerbach Rehearsal Hall also opened up as a part of the performing arts complex that also housed Louis M. Davies Symphony Hall.

In 1989, a severe earthquake shook the opera house and cause major damages. However with the help of some private donations, these damages were recovered and several state of the art additions were also made to the facility.

Whats the maximum price you are offering for don quixote in sf tickets?

For complete details about War Memorial Opera House Tickets and their prices, please visit our website or call us on out toll free number in case you need any further assistance.

I really want war memorial opera house best seats but not sure whether tickets im interested in will get me good seats or not. Please help me find best seats!

Sure! Please check our Venue Map to get a better idea about seats or get in touch with our Livehelp Operator for assistance on best seats at The War Memorial Opera House.

Are you authorized to sell san francisco nutcracker tickets?

Why not? The registered brokers can sell any ticket they have through us. So don't worry and order War Memorial Opera House tickets today.