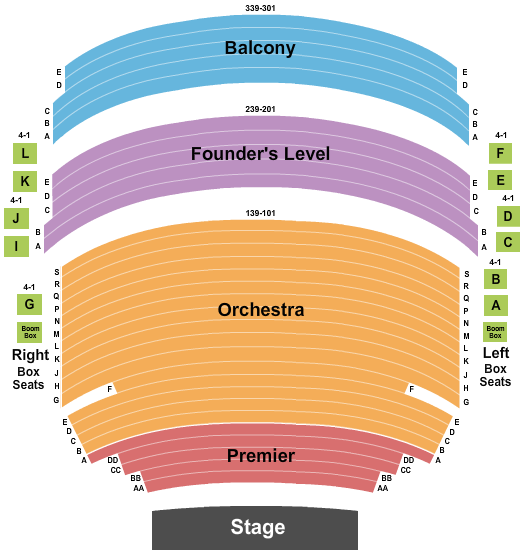 Who will play at Mccallum Theatre today?

No event is happening in Mccallum Theatre tonight.

How many seats in Mccallum Theatre?

Can you buy tickets at Mccallum Theatre?

Depending upon the availability of tickets for that event, you can buy tickets on Mccallum Theatre.

What are the best seats available at Mccallum Theatre?

We have ORCHESTRA for Mccallum Theatre available.

How many events are on sale for Mccallum Theatre this week?

Total 0 are taking place at Mccallum Theatre in this week.

Mccallum Theatre
Primarily established to satisfy and further the educational, entertainment and business needs of the people of Coachella Valley, the McCallum Theatre is a non profit organization that relies heavily on volunteers from its neighborhood to meet its own needs and those of its staff, patrons and actors.

It also relies on volunteer help to provide the various services offered by it to its actors and entertainers. More than 425 volunteers currently serve as ushers, docents, Green Room attendants, and administrative aides, who answer phones, perform data entry, stuff envelopes and do other important tasks.

"To educate and entertain the public through the performing arts, with an emphasis on serving children and youth of the Coachella Valley by a variety of performing arts experiences that reflect the diversity of people, interests and tastes of the communities and constituents served by the Theatre".

The McCallum Theatre attempts to achieve its targeted objectives through the organization of various educational and entertainment events in the Coachella Valley so as to provide the people with the much needed cultural education and uplift to the upcoming generation.

It all began in May 1973 when a group of Coachella Valley aspiring business, education and cultural leaders organized as Friends of the Cultural Center, Inc., and committed themselves to the creation of a high-tech performing arts center. Their vision was to enhance and enrich the lives of desert residents by making the performing arts available to as many people as possible.

Vision of these few aspiring individuals became reality in January 1988, when the McCallum Theatre saw the face of this earth. It s aim to provide cultural education and entertainment to the children and adults of the Coachella Valley reflects in its name - it is tagged after a pioneer desert family, the McCallum has gained acclaim as one of the country's finest presenting theatres by audiences, entertainers and peers alike.

On April 7, 1988, the Muses 100 was formed to raise funds for the McCallum Theatre by a group of dedicated women, led by Erna Schulhofer. Eminent ladies such as Leonore Annenberg, Betty Ford and Dolores Hope were among the first to join. Almost immediately, the Muses 100 reached the original goal of 100 members.

Shortly thereafter, a new level of the Muses was formed - the Patroness Circle and today there are a total of 348 members. Over the years, the Muses have produced a variety of sold-out events in support of the Theatre.

In 2003, the Muses unanimously raised the decision to allocate all monies raised for the McCallum Theatre Institute (Education Division of the Theatre) in support of their various arts education programs.

These varied educational and cultural experiences are provided to more than 37,200 children in the Coachella Valley annually. To date, the Muses have raised almost $4 million for the Theatre.

The Steinway concert grand pianos were donated to the McCallum Theatre by Jeanne Anderson Garrett in loving memory of her husband John D. Garrett, and the Board and Friends of the Virginia Waring International Piano Competition. The McCallum Theatre is proud to use JBL professional sound systems, including JBL loudspeakers and Sound craft mixing consoles.

The McCallum Theatre is located in the great community of Palm Desert, California, a 2 - 3 hour drive southeast from Los Angeles on U.S. 10, and 11 miles east of Palm Springs in the Coachella Valley. The address is 73000 Fred Waring Drive, on the northeast corner of Fred Waring and Monterey Avenue.

There are two convenient ways to reach the Theatre:From Highway 111, which runs through all of the communities in the valley along its southern edge, turn east on Fred Waring and drive approximately one-half mile. Cross Monterey Avenue and turn left into the Theatre parking lot.

From Interstate 10, which skirts the valley communities to the north, take the Palm Desert/Monterey exit, and proceed south for five miles. Turn left on Fred Waring Drive, and left into the McCallum parking lot. The McCallum offers ample free parking.

What are the advantages I will be getting with discount tickets for mccallum theatre coupons?

For complete details about Mccallum Theatre Tickets and the advantages you will get with the discount coupons, please log on to our website.