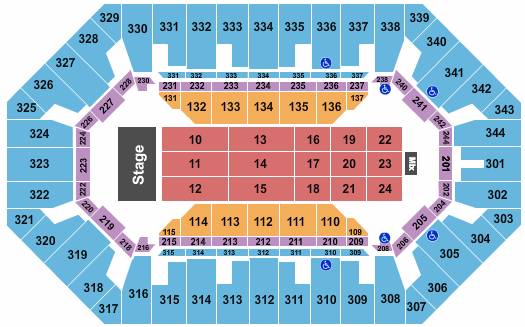 Who will play at Freedom Hall At Kentucky State Fair today?

No event is happening in Freedom Hall At Kentucky State Fair tonight.

How many seats in Freedom Hall At Kentucky State Fair?

Can you buy tickets at Freedom Hall At Kentucky State Fair?

Depending upon the availability of tickets for that event, you can buy tickets on Freedom Hall At Kentucky State Fair.

What are the best seats available at Freedom Hall At Kentucky State Fair?

We have 11 for Freedom Hall At Kentucky State Fair available.

How many events are on sale for Freedom Hall At Kentucky State Fair this week?

Total 0 are taking place at Freedom Hall At Kentucky State Fair in this week.

Freedom Hall At Kentucky State Fair
The multi-purpose arena, Freedom Hall, is situated in Louisville, Kentucky. It is a tremendous site to hear live performances. The hall is based on the grounds of the Kentucky Exposition Center, formerly known as the Kentucky Fair, which is owned by the Commonwealth ok Kentucky.

The arena is best suitable for basketball, concerts, ice events, circus, wrestling, tradeshows, conventions, horse shows, and other large-scale productions and since 1956, the arena serves as home of the University of Louisville Cardinals men"s and women"s teams and is best used as a basketball arena.

The hall has also served as home of the Kentucky Colonels and American Basketball Association from 1970 to 1976, when the ABA-NBA merger took place in June that very year.

The construction of the Freedom Hall completed in 1956. However, the hall was refurbished and refined in 1984 to increase its seating capacity from 16,613 to 18,865. Lower arena seating and the ceiling were torn out and renovation crews removed some 10,000 square feet of dirt to lower the floor about 10 feet.

An approximate amount of $13.3 million was invested for the renovation of the 45-year-old, state-owned facility. As a result, the renovation project has provided the Cardinals with a showcase for college basketball at its best.

In addition to added seating, among the structural improvements were a $750,000 lighting system that is daylight balanced, a $225,000 sound system, a new ceiling, a reinforced roof and a new heating, ventilation and air conditioning system.

Twenty-four private boxes are also included, which are located between the lower arena and loge seats. A new scoreboard system and video wall setup was installed in 1994. A press room, locker rooms and coaches' offices for the Cardinals and visiting teams, a president's reception room and two plush VIP lounges were also some of the additional features which resulted due to the renovation.

The facility has been the full time home of Cardinal men's basketball since the 1957/58 season, with the team winning 82% of home games in 50 seasons. U of L has ranked in the Top 5 in attendance for the past 25 years, with 16 of the past 19 years averaging more than 100% of capacity.

Freedom Hall has also housed nine Metro Conference Basketball Tournaments and has also staged six NCAA Finals. U of L also hosted the First and Second Rounds of the NCAA Southeast Regional in 1991. Other than this, Freedom Hall hosts the Championship tractor pull every February during the National Farm Machinery Show.

Freedom Hall was designed for the very famous event, the Kentucky State Fair World"s Championship Horse Show, and thus it is a host to that also. Each November, the North American International Live Stock Exposition is also held there in the hall. The venue is a host to the Louisville Fire of af2 as well.

On the lower level is situated the Athletic Hall of Fame Walls of Fame here an engraved bronze plaque honors each inductee. It is a tribute to Kentucky sports achievement at all levels of competition.

Engraved plaques for each inductee bear their likeness and provide short biographical information, including the date of induction into the KAHF. The "Walls of Fame" exhibit is free and open to the public during any sports activity or general event at Freedom Hall.

In addition to college basketball, Freedom Hall has served as a site of the state high school basketball tournament, all-star contests and various concerts and conventions. Freedom Hall at Kentucky State Fair is now one of the most celebrated concert hall in the city for tour stops and weekend shows.

Tickets to every concert at Freedom Hall at Kentucky State Fair are worth the fee for the hysterical masses and the awesome atmosphere.

Searching for 1994 ky state fair tickets but have no patience to stand in long queues. Can i grab them online?

Beat the queues! As you can now make one easy booking of Freedom Hall at Kentucky State Fair tickets through our hassle-free server and enjoy our quick service!

How much is the delivery cost for louisville vs kentucky tickets?

All the costs related with Louisville vs Kentucky tickets will be reflected on the check-out page.

HI, CAN I FIND MILEY CYRUS TICKETS FOR SALE IN LOUISVILLE KY?

Sure, please look through the artists page to find all their tickets at cheap prices.

I am wondering if you have miley cyrus freedom hall louisville ky show info?

Go to our Freedom Hall at Kentucky State Fiar page to find out the show information.

Have you got metro north harlem line schedule?

Check out our Freedom Hall At Kentucky State Fair tickets page for the details.

I need to know what is the price of miley cyrus tickets state coll?

Go to our Miley Cyrus page to find out the price of your desired tickets.

When do the tim mcgraw kentucky state fair tickets go on sale?

Freedom Hall at Kentucky State Fair tickets are now up for grabs.

Do you have the dates for miley cyrus freedom hall louisville ky? I am confused.

Kindly check the schedule of the Freedom Hall venue for details.

When is the miley cyrus concert louisville ky?

Do get complete Miley Cyrus schedule, please check her section.